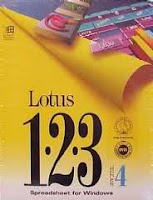 One afternoon in the Spring of 1993 in a conference room in San Jose, California I learned that product versions for software are meaningless.

Well, not exactly meaningless, but mathematically illogical, as in 1 + 1 = 4.

The product manager for Lotus 1-2-3 and I were briefing an influential Dataquest analyst on the forthcoming enhancements to the Lotus 1-2-3 for Windows spreadsheet. It was a major overhaul of the less-than-successful version 1.0 and 1.1 releases of the product.

Favorably impressed with nifty new features like instant charting and "Scenario Manager," the analyst suggested we abandon plans to label the new product "release 1.5" or even "2.0."

If we really wanted to make an impact, to heck with arithmetic. Skip a few steps entirely and call it "Lotus 1-2-3 Release 4."

And the tagline that adorned the tee-shirt read: "It's Not Just a New Version. It's a New Vision."

Which brings me to the naming conventions for software-as-a-service (SaaS) solutions.

When it comes to sticking version numbers on SaaS solutions, don't bother with labels like 1.1, 2.0, or anything-dot-anything.

Also drop any notions about using "Winter" release or a "Spring" release. These seasonal monikers work for beer; not for SaaS solutions. (I also suspect they're confusing to customers in the southern hemisphere.)

In the old world of desktop applications and on-premise software, we made a big deal about new versions. It helped us sell more software. Our version 4.0 must be better than the competitor's version 3.0. And it must be way better than our old version, 1.1.

It worked really well for awhile and companies made a lot of money on this upgrade cycle. Every couple years we convinced people to rip out the old stuff and buy some new stuff.

But the logic of the upgrade cycle, and the version labels that went along with it, don't fit with SaaS solutions.

And if the prospective customer is asking "Which version release will I be buying," you need to do a better job of educating them on the basics of SaaS.

The only people who should know or care about version numbers are in your customer support group. In order to diagnose problems, they may need to know precisely which version the customer has access to at any particular time.

I was talking yesterday with a friend who I know from the old days doing public relations. PR back then was about preparing announcements, backgrounders and glossy photographs, arranging press and analyst tours (usually under embargo), and pitching stories over the phone.

Moderate success was a few column inches and a color screenshot in a trade publication. Big time success was positive coverage in The Wall St. Journal or The New York Times.

Things change... but not entirely.

I work with clients who still use PR to generate visibility. Now press announcements are heavy with keyword phrases and sprinkled with links, and we send along photos as a .pdf or .gif. They're sent on to bloggers and news aggregators as well as to the shrinking pool of journalists with more traditional publications. The press announcements are also "self-published" via the company's own blog, newsletter or website.

Companies still do live events, too. Though there are plenty of options for people to virtually connect, sometimes face-to-face contact is better. Though events can be expensive - exhibit space, booth set-up, shipping & drayage, plus travel expenses - they can be effective if you clearly understand where events fit in the overall customer acquisition process. Though you may only talk to a handful of prospects at a regional event, if 3 or 4 of them convert to paying customers, it may be a great investment.

Events have also been infused with newer, social media elements. Nearly all of them label themselves with a Twitter hashtag, and the online conversations about the proceedings are every bit as rich as the in-person presentations. Sometimes more so.

Even outbound telephone calling has had a social media facelift. There's a new concept known as "social selling." In contrast to the traditional cold call, outbound sales people use social media to better target and prepare for telephone conversations.

Don't rule out marketing tools that you think may be too "traditional." PR, events, and outbound telephone calling techniques have all been "social media-ized," making them more "modern" and more effective. Try them, measure the results, and see if they fit into your SaaS marketing mix.

This work by Peter Cohen, SaaS Marketing Strategy Advisors is licensed under a Creative Commons Attribution 3.0 Unported License.
Posted by Peter Cohen Managing Partner at 10:53 AM

Peter Cohen Managing Partner
I’m Peter Cohen, principal of SaaS Marketing Strategy Advisors, and the author of the "Practical Advice on SaaS Marketing" blog.  Before I started my own firm and this blog, I'd spent many years in marketing positions with Lotus, IBM, and other companies.  If you have marketing responsibilities at your company, I've been in your shoes.  In particular, I’ve learned a lot about what works and what doesn’t when it comes to marketing software-as-a-service (SaaS) solutions.  Whatever issue you're facing, there's a good chance that I've seen it before. I started SaaS Marketing Strategy Advisors and this blog to share that experience with my clients.  I focus on providing practical, actionable advice that has measurable impact.  Peter Cohen